First-year Medical Student, Mulungushi University Idah is the oldest of four children. Both of her parents have passed away, leaving Idah, her two brothers and sister orphaned and under the care of their grandfather. Her grandfather was unable to raise funds to pay for school fees, and in many homes, Idah – being the oldest daughter – would not have the option to pursue her secondary education. Instead, she would be held responsible to care for her younger siblings. With the help of Bakashana and her sponsors Cindy and Ed Valentine, Idah has now completed boarding school at the finest school in Kasama, and scored very high on the state exam. Idah’s strong, quiet presence, and ambition to pursue employment in the medical field after school, pushed her through secondary school. Now, with continued help from Cindy and Ed, and Bakashana, Idah is attending Mulungushi University and continuing to follow her dreams!

Fourth -year BA of Education and Library Studies, Full Bursary, University of Zambia Orphaned at a young age, Ruth’s opportunity to pursue a high school education were slim, but thanks to the support she received from Bakashana, Ruth studied hard, and took advantage of the opportunity she was given to learn at Kasama Girls School. Ruth faced and overcame many challenges, and managed to get good grades and score well on the 12th grade national exam. She then moved to Lusaka and began using her personable nature, her motivation, and help from Bakashana, to search for sponsors for University. She was accepted on full bursary (scholarship) to the University of Zambia (UNZA), and is now in her fourth year in Secretarial Studies. We are so proud of Ruth, and look forward to continuing to work together and support her as she becomes Bakashana’s first University Graduate!

Studying to be a Secondary School Teacher, Kasama Teachers Training College Patricia Besa is 21 years old, the 3rd of 5 children. In primary school, she passed 8 of 9 classes and had the highest scores on the tests Bakashana administered for admission into scholarship. She is from Mpika district in the village of Lucembe. Patricia was in the Girls Leading our World (GLOW) club and was even selected to go to Lusaka in 2010 were she met Hillary Clinton. Both of Patricia’s parents are living but struggle with school fees. Many family members are not supportive of Patricia going to school, but her mother and another female relative have encouraged her. Patricia is thrilled to have graduated secondary school, and is working hard to acheive her teaching certificate and procure gainful employment.

Prudence Mulenga is from Lukupa village in Kasama district about 15 km outside of Kasama. Her father died 10 years ago and she lives with her mother and 2 younger sisters. She is outgoing, sassy, and has a passion for drama and art. Since graduating from secodary school, she has been running her own business in the village, producing baked goods. She supports her son and husband and helps her grandmother with farming.

Sarah Mwango is the second to last born in a family of five. Her parents are both now in their late 60s and continue to support themselves as subsistence farmers. Sarah will be entering grade 11 in 2016 and is the first in her extended family to have reached high school. She comes from Lukupa village, where Justin and Claire have been hosted so graciously for the last two years. As a reward for her hard work at school and on the farm, she is one of the girls living at the Bakashana resource center where she has time to fully immerse herself in her studies. She is overjoyed to be pursuing her education. 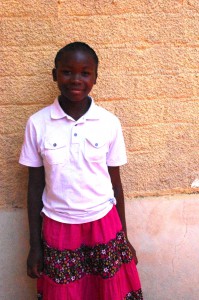 Christabell Chewe is 15 years old in grade 10 at Kasama Girls School. She has one brother and two sisters, and is the third born. Her father died in January 2006, and since then, her mother has been supporting her and her siblings alone. Her mother, Judith Mulenga, farms small plots of maize to provide for her children, but has found that with increased school fees, she needs more money than she did when they were young. To earn additional money, Judith and her sister brew a hard grain alcohol called kacasu (ka-cha-su) and sell it out of their home. As with many native communities, alcohol has created many social problems in Kasama and surrounding areas, leading to increased rates of crime and domestic abuse. Most of those who consume this liquor are men.

As you can imagine, living at a bar is not easy for a young woman. Against these odds, Christabell has worked hard to achieve commendable results at school. For these reasons, Kasama Micro Grants has decided to put Christabell in boarding school in Kasama. Chirstabell is soft spoken but loves to dance, and she has dreams of one day becoming an accountant. 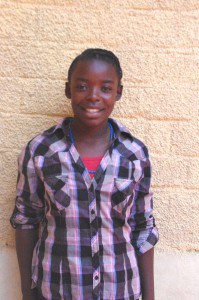 Marvelous Musonda is 16 years old and lives in Chibuta village in the Chilubula area. She is one of four girls and has four brothers as well. Her mother, Theresa Mulenga, lives with five of her children in a single-room, grass-thatched house. Marvelous’ grandmother lives in a small hut nearby. Marvelous was one of 4 girls from her primary school to pass her grade 7 national exams and be selected to move on to secondary school.

Marvelous’ father died when she was 10 years old, and since that time, her mother has supported 8 children on her own by subsistence farming.

Marvelous is outgoing, athletic, and passionate about school. She said that being admitted to grade eight and being chosen to be sponsored by the Bakshana family have been the greatest achievements of her life. 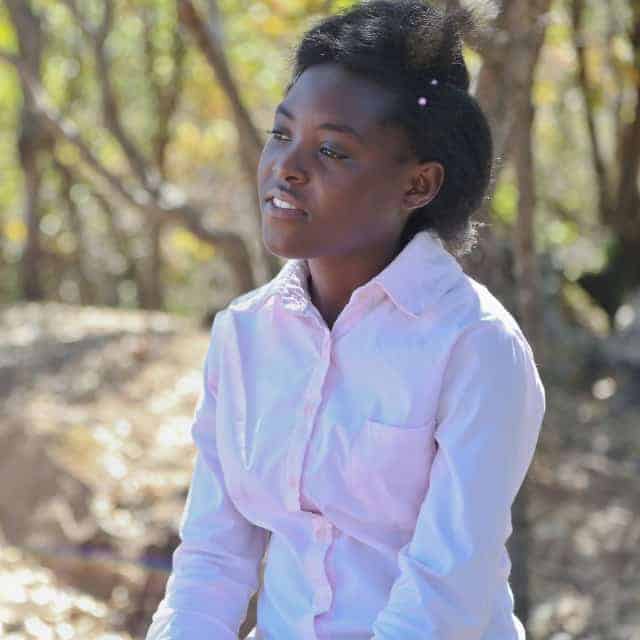 Susan is a quiet force who loves football and comes alive when performing in drama skits or reciting poetry. She lives with her mother and 3 older sisters in Bwembya village. Susan walks the 15 KM to and from her village to Laura Girls School each day, proving to her family and the bakashana family her ambition to become educated. Susan’s mother is a subsistence farmer who has found it challenging to support her 5 daughters on her own. Bakashana is excited to bring Susan into our family, and offer her the opportunity to continue the education she so eagerly desires.

Theresa’s story was brought/to our attention in the second term of the school year because her case was urgent. As she told us, Bakashana was her last hope. Though the brightest and highest-scoring in her grade 9 class, Theresa’s lack of family support and finances prevented her from starting grade 10 on-time. We were fortunate to secure a spot for her at a Boarding school about 100 km outside of Kasama. The Head Teacher only agreed to enroll her (though she missed the first term) because of her outstanding marks and proactive attitude.Theresa is 15 years old and has been living with her Grandparents since 2009, after her Father passed away and Mother abandoned her and her two siblings, not to be seen or heard from for more than 11 years. Theresa’s life at home with her grandparents is not conducive to learning, and she has had a rough go.

Regardless of these obstacles, she has persevered and pro-actively pursued the future that she knows she deserves instead of sitting back and letting her life pass her by. We feel grateful to have such a confident, well-spoken and strong young woman as part of the Bakashana family. 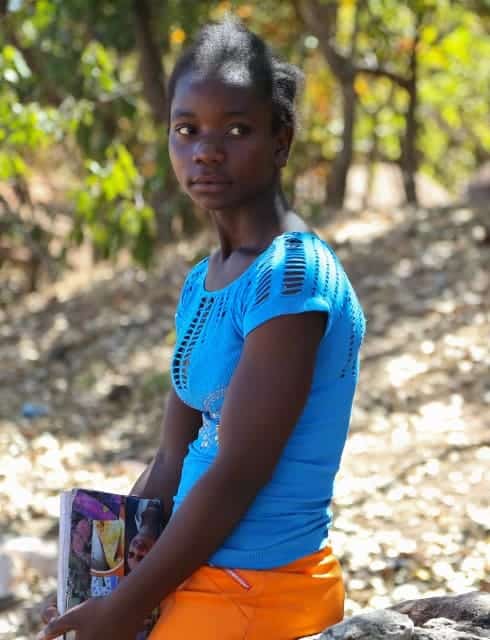 Idah is the oldest of four children. Both of her parents have passed away, leaving Idah, her two brothers and sister orphaned and under the care of their grandfather. Together, the children and their grandfather live in Chitambi Village. Idah is 18 years old and helps her grandfather in his fields after school, trying to help support the family by small-scale farming. Her grandfather has not been able to raise funds to pay for school fees, and in many homes, Idah – being the oldest daughter – would not have the option to pursue her secondary education. Instead, she would be held responsible to care for her younger siblings. With the help of Bakashana and her sponsor, Idah is now boarding at school, the finest boarding accommodation available in Kasama, and given the chance to study at all times, her grades are near perfect. Idah’s strong, quiet presence, and ambition to pursue employment in the medical field after school, in addition to her financial need, make her an ideal candidate for sponsorship and support by Bakashana.

“I stopped going to school in grade seven because my parents were having a hard time finding money for school. I stayed home, after we found some money I repeated grade seven. I managed to pass again but there was still no money for school. We used to pray as a family for help. We asked other family members for help but they were facing their own problems. We asked neighbors, friends, and schools but nothing changed. We never lost hope and continued praying.”

Paxina, grade 10, has been taken care of by her Grandmother and Mother, both of whom are peasant farmers. She passed her grade 9 national exam three years in a row, but each year repeated because the family didn’t have enough money to send her to school in town. Finally, this year, Paxina’s story was brought to our attention by a Peace Corps Volunteer, Katie. Paxina travelled from neighboring District Mbala to be a part of the Bakashana program and complete her education at Kasama Girls School.

Veronica was recommended by the Head Teacher at Laura Girls School. She had come to school in 2014 in need of assistance, but her grades were not good enough for her to be admitted. On recommendation, she repeated grade 8 at the school in her village, and achieved her goal, passing with high marks last year. Veronica has always wanted to go to Laura Girls School, and has been showing up on weekends to help in small ways with gardening and washing in order to secure a place for herself. She is 16 years old, and lost both of her parents at a young age. Since that time, she has been staying with her single Aunt who gets by selling fry cakes. Veronica has ambition to be a teacher when she finishes school, and with the help of Bakashana and her personal sponsor, she will have the opportunity to achieve her dreams.

“One of the most courageous things you can do is identify yourself, know who you are, what you believe in and where you want to go.”

If you would like to pay by check or money order please email us for more information.